Why do I need BIONICBAND®?

One of the main problems of our civilization is electrosmog. However, the problem is the fact that it is hard to prove, because proving a bad influence of something that we do not see nor hear, that is really complicated. In such studies there are many variables. Even though  there are dozens of studies  implying the danger of electrosmog, unfortunately they do not get appropriate attention and  rather they are belittled.

For example, there is one of the good documentaries Full Signal – The Hidden Cost of Cell Phones, however as usual it is not accepted by the experts.

Electrosmog or electromagnetic pollution of environment results from the accumulation of different electromagnetic influences in the area surrounding us especially in the cities.  These are artificial electromagnetic fields emanated by all electronic devices, especially the transmitters of mobile and data operators, wiring of high frequencies, transformer stations, but also any electronic equipment at home like mobile phones, electric or induction cookers, televisions, computers, radios, clock radios, etc.

All these emanate electromagnetic radiation and that is of course not usual for the nature of Earth in such intensity.

Many of our customers report:

A recent independent study by the German Dartsch Scientific Institut Für Zellbiologische testsysteme has shown that BIONICBAND® improves cell vitality by 10-15% (fibroblasts), leading to improved overall vitality and well-being. Improving the immune system (up to 25% improvement in the components of the immune system). The full test report can be found here: Test Report_07.01.2022

In the other study, a cell biological test assay was used to investigate whether BIONICBAND® might be able to protect against exogenous oxidative stress. Oxidative stress is an imbalance between free radicals and antioxidants in your body and so our cells die prematurely. In practice, it means that it causes premature aging, cell renewal disorders and serious diseases. Exogenous oxidative stress plays a key role in several pathogenic processes caused by environmental pollution or due to unwanted electromagnetic fields from mobile phones or data communication devices (elektrosmog).

The test showed that BIONICBAND® increases cellular resistance to exogenous oxidative stress in situations where the body is involved in regenerative or healing processes. Cells had a 10-12% higher viability with BIONICBAND® than the control group without BIONICBAND®. You can find the whole test HERE: Test report_oxidative stress_12.03.2022 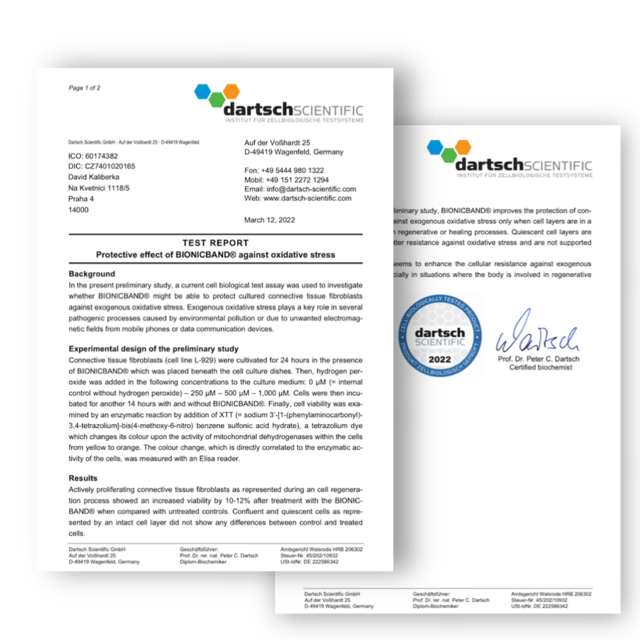 How does it work?

To make it easy, imagine a symphony orchestra, where every musician plays on his instrument perfectly, however but everyone starts at different times and plays a different melody. They would be out of harmony! Such a concert would be a grating cacophony and it would sound terrible. However when a conductor intervenes, harmony set in. After a while all the instruments would tune up, the sounds would harmonize, and the most beautiful tones would come into existence. Such music would be harmonious and balanced. And that is exactly what the BIONICBAND® bracelet does. It is like a tuning fork for the body.

How does it work?

The BIONICBAND® bracelets are set for frequency of 7,83 Hz (Shumann Resonances – explained below). We could say it is basically a “tuning fork“ for the cells of our body, using the phenomena called as “sympathetic resonance“. It is simply a phenomena of transfering energies between equally tuned objects. For example if you have two identical musical instruments and you start to sound one of them, the other one starts to sound as well although you would not touch it. Similar phenomena happens with the bracelet and our body. The bracelet “sounds” on the same frequency as our cells, and thus transmits its energy to the cells. Thus harmonyiousness arises.  So, BIONICBAND® helps us to resist the negative influence of electrosmog. Therefore many our customers report immediate relief from backache, improvement of vitality, sleep, strength, balance and overall improvement of health as well as lesser sickness rate.

What are Shumann resonances?

In the atmosphere of our planet there are measurable series of low-frequency resonances caused by lightning discharges. They were predicted by physicist Winfried Otto Shumann who studied the theoretical aspects of the resonances  and made attempts to measure them already in 50´s of last century. (https://en.wikipedia.org/wiki/Schumann_resonances)

In the time when Schumann published the results of his research in Technische Physik magazine, Dr. Ankermueller immediately connected the Schumann resonances with Alpha rhythm of brain waves. Later on Herbert König, who became Schumann´s successor at the Technical University of Munich, showed a correlation between Schumann resonances and brain waves. Correlation is a word that comes from Latin and means mutual relation, interdependence between two processes or quantities. When one of them changes, the other variable also tends to chang. He compared records of human EEG with natural electromagnetic fields in the environment (in 1979) and found out they were very close to the frequencies of alfa rhythms.

All life on this planet is naturally tuned and influenced by these frequencies which work also like a ”tuning fork”, they are tuning anything alive. However, these frequencies are not clear but dispersed as a result of artificial electromagnetic radiation created by man. We could easily imagine how it is like, if the cells of our body would be one orchestra of singers and musical instruments, however there would be such a noise that no one could hear his own voice nor tone. They could not play together. Similarly, this is our body!

How is it possible that the bracelet keeps its frequency? Is there a battery?

The principle of BIONICBAND® bracelet function is based on the fact that matter is condensed energy. This fact was described by Albert Einstein in the most famous equation E = mc². So, matter is nothing else than a form of energy.

Energy simply means force or potential of movement. Either force or movement of particles from one place to another. Energy is a word that comes from Greek word energeia meaning will, force or ability to act.

In nature we can observe energy in many different forms. We perceive its manifestations as movement or various vibrations influencing our organs and senses.

Everything in the world is in constant movement, everything vibrates, moves, emanates energy of corresponding frequency.

Frequency is a physical quantity giving the number of occurences of repeated event per unit of time.

Everything has its own frequency. As well as our body is basically energy vibrating with particular frequency.

How do I feel that in practice?

We cannot promise any health effects however thanks to the fact that all cells in the body should improve their workability and not be disturbed, our customers report better sleep, more vitality, better concentration, less illness and sportsmen speak about better performance, less pain, etc.

You don´t need to trust me. Just try!

We sell these bracelets for more than 12 years. We have plenty of satisfied customers including top athletes and celebrities. However we understand that our product is not “usual” therefore we provide fair trade: 30 days money back guarantee!

We have a NEWCOMER: Special patches just for the price of shipping! They are also treated for the right frequency like the  BIONICBAND® ORIGINAL bracelet for non-stop wearing and they work the same (for 1-3 days until they rub out). You can find it all in our eshop!

This product does not replace medical care and it is only a supplement to a healthy lifestyle.

Watch the demonstration videos by Dr. Gordon Pedersen and try these tricks with your own BIONICBAND® bracelet!

This website uses cookies. By continuing to browse this site, you agree to their use. More information here.